Nice things to see and to do! 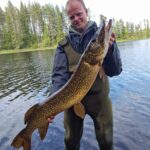 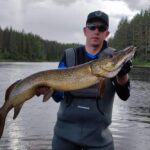 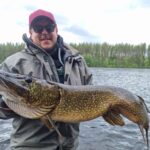 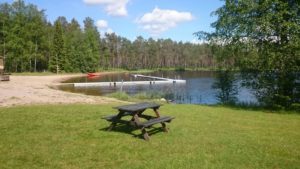 11 km away – Finngården Skifsen
A unique, long-term and non-profit project aims to build a Finn farm in Skifsen, the way it could have looked in the 1750’s.

The site is chosen with care. It is one of the six first settlements in Säfsen, where the forest Finns settled around 1620. Thereafter, the place was inhabited until the middle of the 1940’s, when the two remaining farms were demolished. Fir trees now cover the area, but the foundations of the buildings remain.
Buildings and houses that were typical of a Finn farm are being built next to the original site. The buildings are to some extent adapted for modern use. There is a smoke sauna, a cookery cabin with stove, a provision-shed built on posts, a barn and two further buildings – a kiln and a traditional Finnish cabin.

The farm is managed and developed by the local Skifsen’s vänner society.

25 km away – Station Sågen (railbike rental station)
On an abandoned railway line, cycling right through the Swedish wilderness.
A rail trolley cycle (also know as a draisine or rail-bike) is a lightweight affair for two people (one pumps the pedals, one takes it easy) or four people (two pump the pedals, the other two take it easy).
Bring sandwiches, drinks and swimming gear and enjoy a day with the family or just the two of you.
Rail cycling is a summer activity that suits all ages

30 km away – Långbans Gruvby  (Långban mine and culture village)
Langban is one of the world’s mineralest sites with well-preserved environments from the mining industry, with mining fields, the cabin and mineral exhibition. Welcome to learn more about the culture.
One of the world’s mineralest sites with a story that began 1.8 billion years ago. Iron ore has been broken here since the beginning of the 16th century and as late as the 1970s, the mining quietly silenced. On the other hand, Gruvbyn lives with its buildings, mineral collections, exhibitions, beautiful scenery and exciting stories directed by the Värmlands Museum. For you as a visitor, there are a wealth of activities that suit big and small and opportunities for good food and a good night’s sleep.

30 km away – Tibergs Udde
Tibergs udde is located at Langbans Gruvby and is a botanical nature reserve. In spring, lots of cowslips here and in June orchid.
The softly shaped and slightly hilly flower beds are characteristic of the area. Between the meadows are stony and block-rich hills with sparse tree and bush vegetation. In the eastern part of the reserve there are a couple of old fish ponds framed by lush deciduous forest. At the far end of the north, an oceans protrude into Hyttsjön, which occurred during the production period 1910-1925, when scurfs (stone remains after mining) were discharged into the lake. The reserve was formed to preserve the unusual and orchid-rich flora and that the Långban is of international interest in the presence of minerals. The area is part of the EU’s valuable nature network, Natura 2000.
There are seven different orchid species in the reserve; Two leafs, guckusko, breasts, purple squash, green ball, virgin Marie keys and night violin. In addition to orchids, there are, among other things, virgins, meadow watch, gold wiva, underviolet and field gentiana and several unusual species in the county. Forestry, tibast and olvon are found in the bush layer.

25 km away – Lesjöfors “Trollstigen”
A hiking trail among trolls and other creaturs in Lesjöfors. An exciting experience for children and adults who want to discover those living in the woods.
The first 900 meters is up hill, there is a lot to see and nice places to rest your tired legs so the walking will not be as hard as you can imagine.
At the top there is a rest area where you can enjoy a picknick and the view of Lesjöfors and its nature.
The remaining part of the trail goes down hill with crooked and exciting trails. The trail ends in the same place where it started.

The trail is not adapted for a stroller or wheelchair.

25 km away – The Lesjöfors museum is also worth a visit.
There you can learn a lot about the life of the past and how it has changed over the years.
A museum showing the everyday life of both men and women, with exhibits ranging from workshop machinery to hockey players kit and false teeth in a glass water.

We use cookies on our website to give you the most relevant experience by remembering your preferences and repeat visits. By clicking “Accept All”, you consent to the use of ALL the cookies.
Cookie SettingsAccept All
Manage consent

This website uses cookies to improve your experience while you navigate through the website. Out of these, the cookies that are categorized as necessary are stored on your browser as they are essential for the working of basic functionalities of the website. We also use third-party cookies that help us analyze and understand how you use this website. These cookies will be stored in your browser only with your consent. You also have the option to opt-out of these cookies. But opting out of some of these cookies may affect your browsing experience.
Necessary Altijd ingeschakeld
Necessary cookies are absolutely essential for the website to function properly. These cookies ensure basic functionalities and security features of the website, anonymously.
Non-necessary
Cookies that may not be particularly necessary for the website to function and are used specifically to collect users' personal information through analytics, ads, and other embedded content are called non-necessary cookies. It is mandatory to obtain user consent before using these cookies on your website.
OPSLAAN & ACCEPTEREN
Aangedreven door